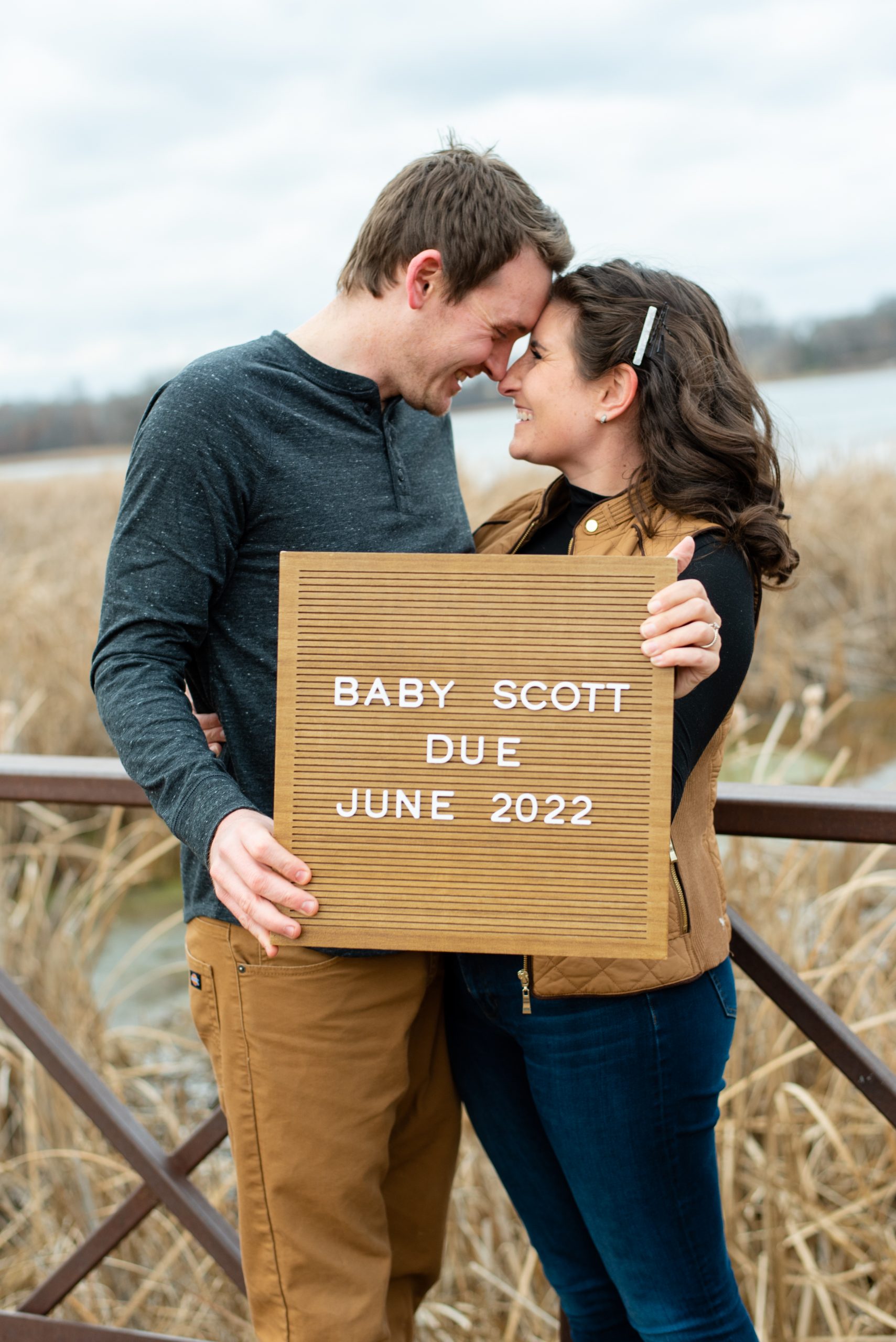 I am SO excited to announce that I am pregnant! That is a sentence I honestly didn’t know if I would ever be able to write, yet here we are 22 weeks in and it is still just as surreal as the first time.

The Road To Baby Scott

The journey to get here was not all lollipops and roses, but I know SO many people go through much much more than we did to get their baby, so we are forever grateful for God’s perfect timing.

After our second wedding anniversary on December 31, 2020, we decided that starting in the new year we would work on growing our family! It was such a time of unknowns, as you never really know if you will have challenges until you get started. Looking back, we went into it with very little knowledge of how it all REALLY works (even though it seems self-explanatory, right?!). Like what we learn growing up compared to what you learn when trying to conceive (TTC) is SO minimal. Our first roadblock was learning in the first week of 2021 that I had a kidney stone that would need an operation to be removed. After talking with the surgeon, he said we should put our family planning on hold until the stone was out as getting pregnant with a large kidney stone would not be ideal. Luckily I was able to have the surgery the first week of February and thought “ok, now we can get back to business right?”….wrong. After a traumatic experience to the body like surgery, especially having a laser blast a kidney stone right near your precious ovaries, it turns out it takes some time to adjust back to normal. After having a pretty consistent cycle after getting off hormonal birth control in September 2020, for the first time in my life, things were very out of wack. This added another level of stress to the process, but we worked with it and eventually, things were getting a little more consistent. 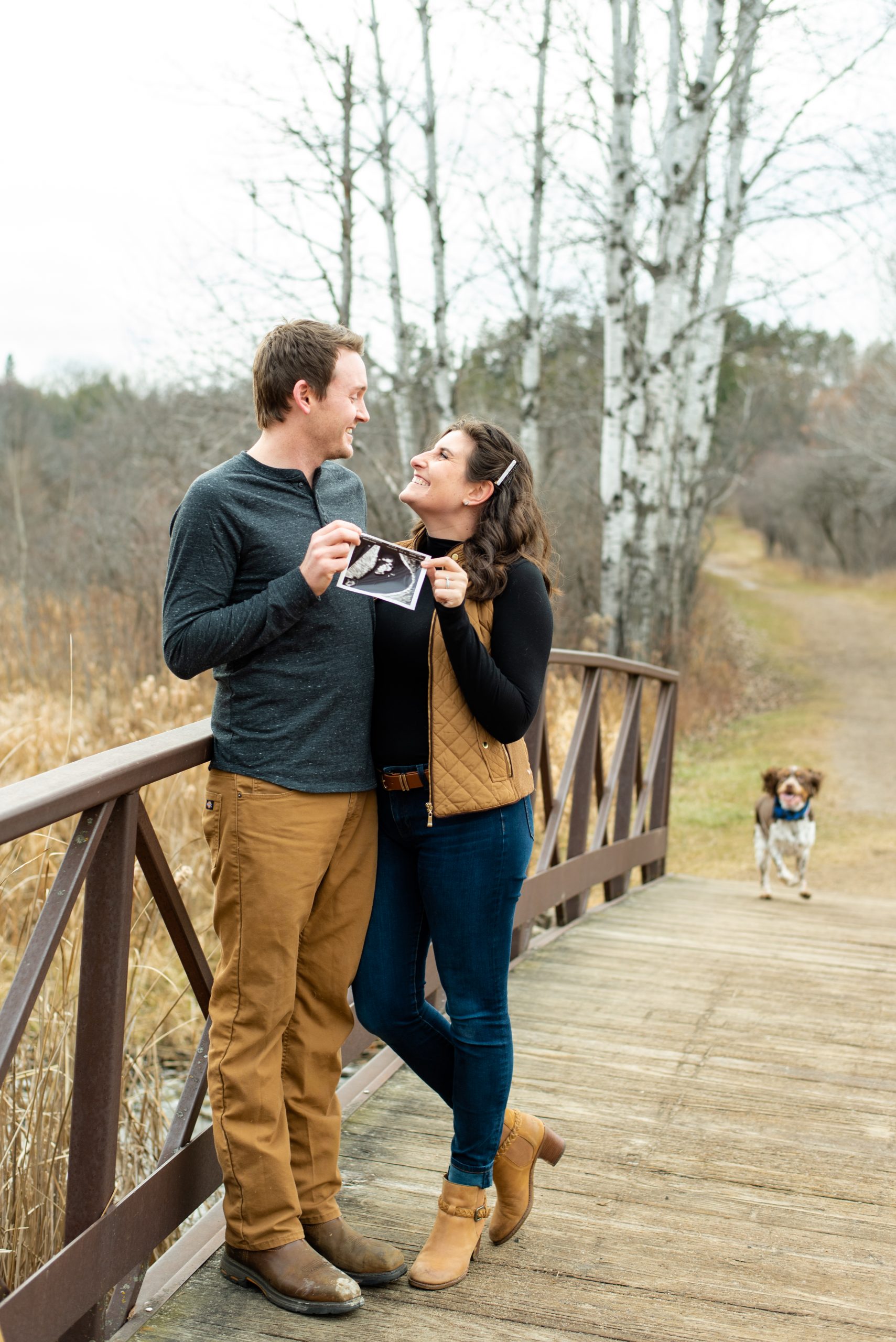 Come June, things were still taking longer than expected so I started chatting with a few of my friends who had had some struggles getting pregnant and learned about ovulation test strips. These were such a helpful piece to the puzzle as they helped establish a timeline to go off of when your cycle isn’t super consistent! They help pinpoint the few days before ovulation occurs so you know you can get the ever-so-important timing correct. Like a lot of things I buy off the internet, I thought this was going to be our golden ticket and we would be pregnant that cycle! Wrong again. These were the toughest negatives to get because, in my mind, we were doing everything right.

I became obsessed with doing research and committed to learning everything there was about fertility. Like did you know that the things you are doing in your diet and lifestyle are impacting your eggs that are released 3 months from now? Because I had no idea! It was also around this time that I became more committed to limiting the toxins in our life because it could only help things, right? I started with simple swaps like switching to stainless steel and cast iron cookware vs. our non-stick, getting rid of candles in the house, switching to essential oils, and really looking into what I was putting in and on my body. I also found an AMAZING chiropractor in my area to help my body function the best it could. If you are in the West Twin Cities area, I can not recommend Carver County Chiropractic Co. enough!

Since food is such a big part of my life, I wanted to know what I could fuel my body with that was also fueling my fertility. I found the Instagram account @ttc.nutritionist and her friend @pcosfertilitynutrition. They also have an awesome podcast called Food, Freedom, Fertility that became my favorite thing to listen to in the car. I soaked up as much knowledge as I could from these two and started to apply it to my life. This meant making big changes to my diet like adding in meat, fish and eating LOTS of eggs. The biggest mind-blower to me was learning that low-fat & fat-free dairy can actually hinder your fertility. Growing up in the ’90s and with a weight-watching mom (and doing Weight Watchers myself for 5+ years), skim milk and reduced-fat dairy were a staple. I also learned that the quality of your food matters. Instead of reaching for the $2 discount pound of butter, I was going for the slightly more expensive grass-fed cow butter. Same with organic fruit and veggies! I was also focussing on eating balanced meals, including breakfast, and making sure if I was eating carbs to pair it with a fat and protein source as well.

The Day I Found Out I Was Pregnant

Coincidently, we finally got those two pink lines three months after making these lifestyle changes. This was also the first month that I decided to listen to my body’s fertile signals it was giving me vs. relying solely on ovulation test strips to get the timing right.

I told myself that I was going to try and take it easy this month and weight until I missed my period to take a test. We were coming up on a few days before it was expected and we were planning on going out and having a few drinks with my brother-in-law and his girlfriend. I took a test JUST to be safe and it was negative – I was in the clear to enjoy myself a little that night! Fast forward 4 days to September 22nd, 2021, and I couldn’t go back to sleep after my husband when to work. I was also using the Proov tests to confirm if my body was even ovulating successfully. Since I was already peeing in a cup that morning, I figured I would try one of the cheap pregnancy tests that came with my ovulation test strips. With zero expectation of seeing anything positive, I set the test down on the counter and went into another room for a while. When I came back to check on the test, I actually burst out laughing when I saw that faint second line! No tears or anything, just disbelief that I was seeing those fabled two pink lines! 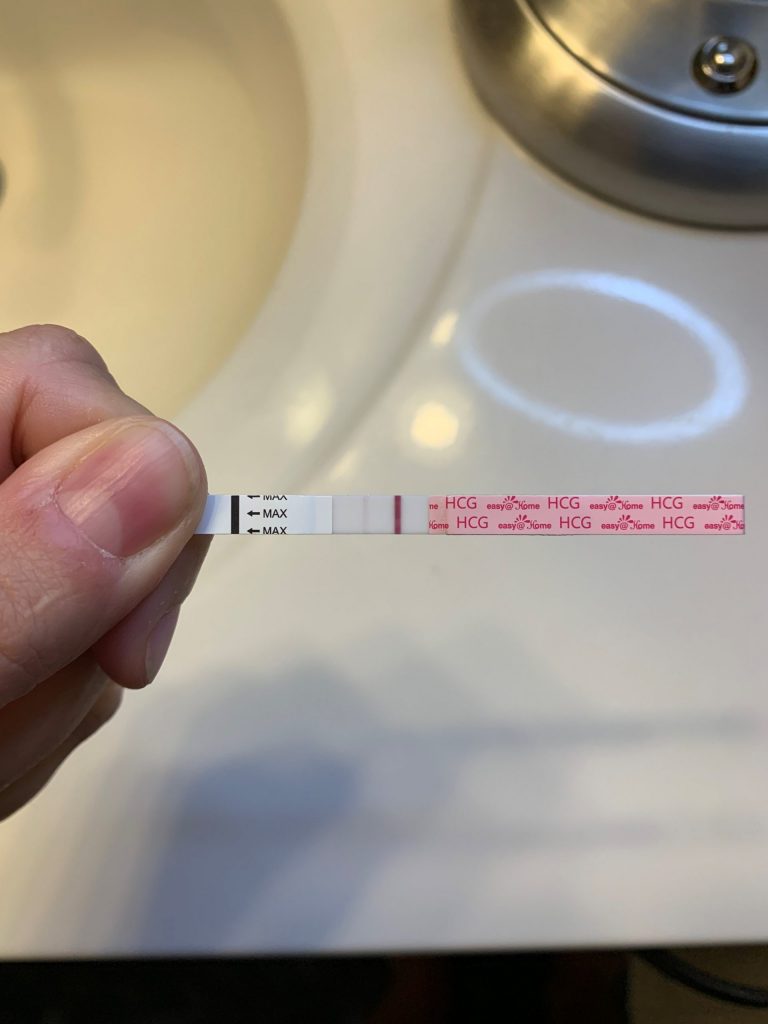 After taking a few minutes to let the news soak in and stop shaking, I ran to the store to buy literally every test they had. It wasn’t because I didn’t believe the first test, it was more that I had never thought I would see a positive and I wanted to keep seeing it over and over again! 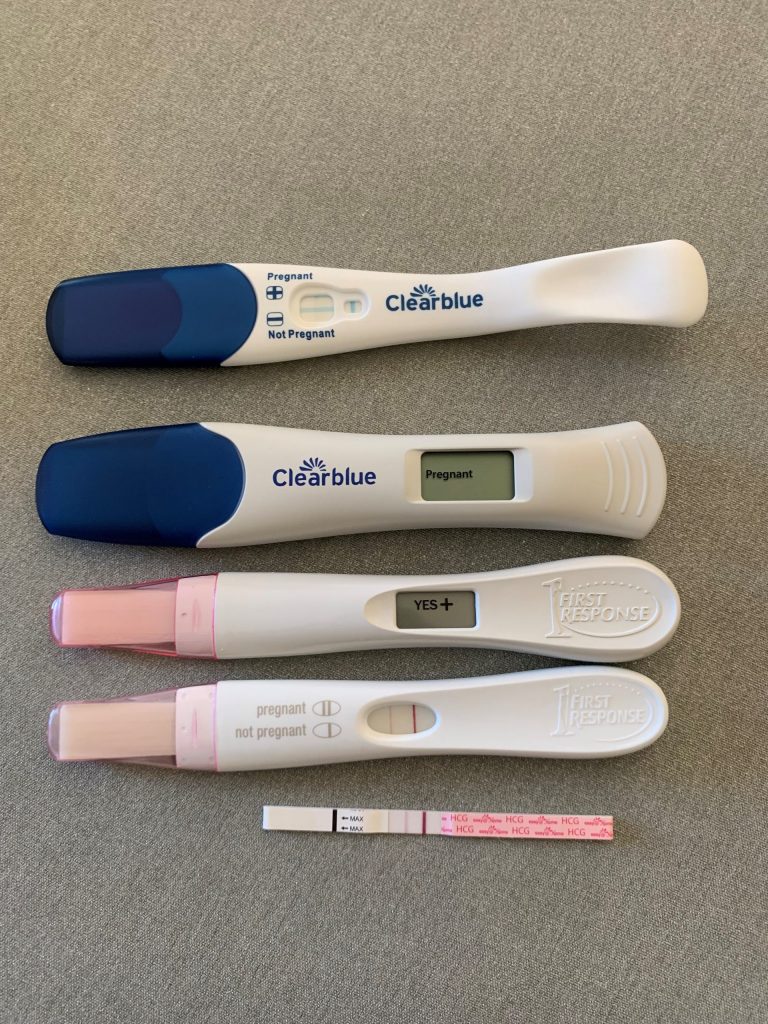 How I Shared the News with Ben

I knew right away that I had to tell Ben that night, but wasn’t sure how. We had planned a little date night of making dinner, going to the sauna at the gym, and then playing a game of Rummy 500. Not sure how, but the idea came to me that I was going to make a playing card that said “I’m Pregnant” and then put it as my discard in front of him. I then had to convince him that I REALLY wanted to play cards before going to the sauna, because I didn’t know how I was going to get it past him that I couldn’t go in the sauna anymore.

After he got home, I kept my cool and made dinner as quickly as possible. I don’t even remember what we had because I was so nervous to tell him! Finally, we started our game of cards and I had my special card and the pregnancy test tucked in my sweatshirt. After a few minutes, I snuck my special card into my hands and put it on the discard pile facing him. 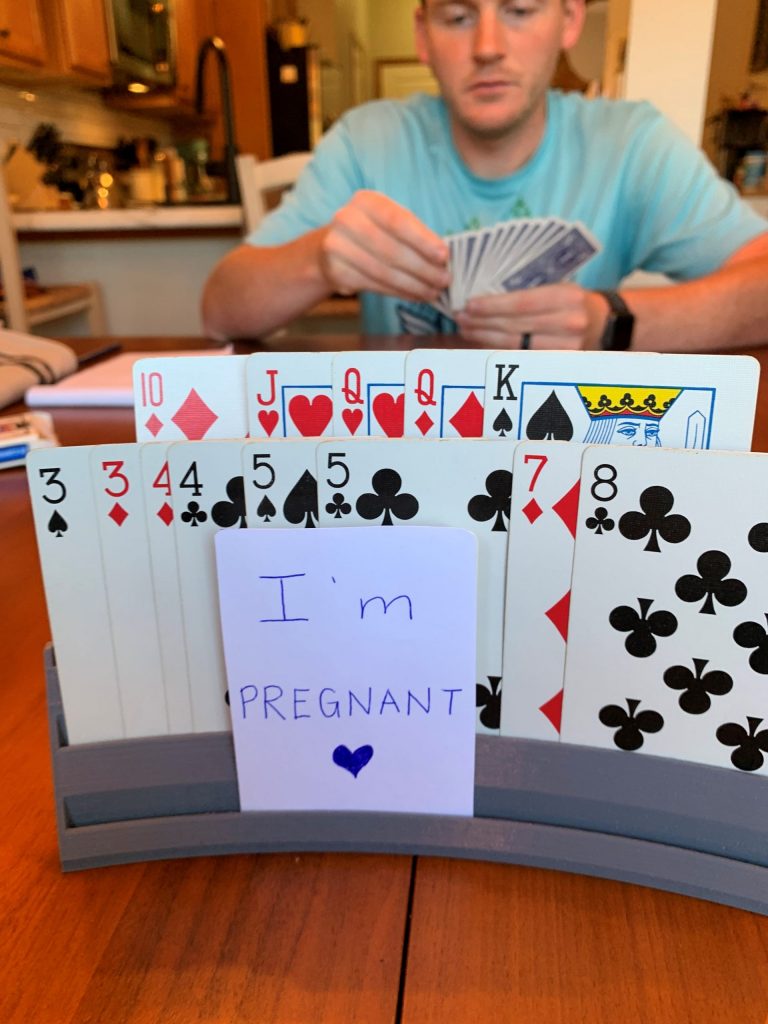 He was in disbelief for a while and just stared at it and blinked. He kept saying “really?” for what felt like 10 minutes! We finally started to let it sink in and talk about how crazy it was that it was actually happening. 18 weeks later and it STILL really hasn’t sunk in that the little thing kicking me is OUR baby. 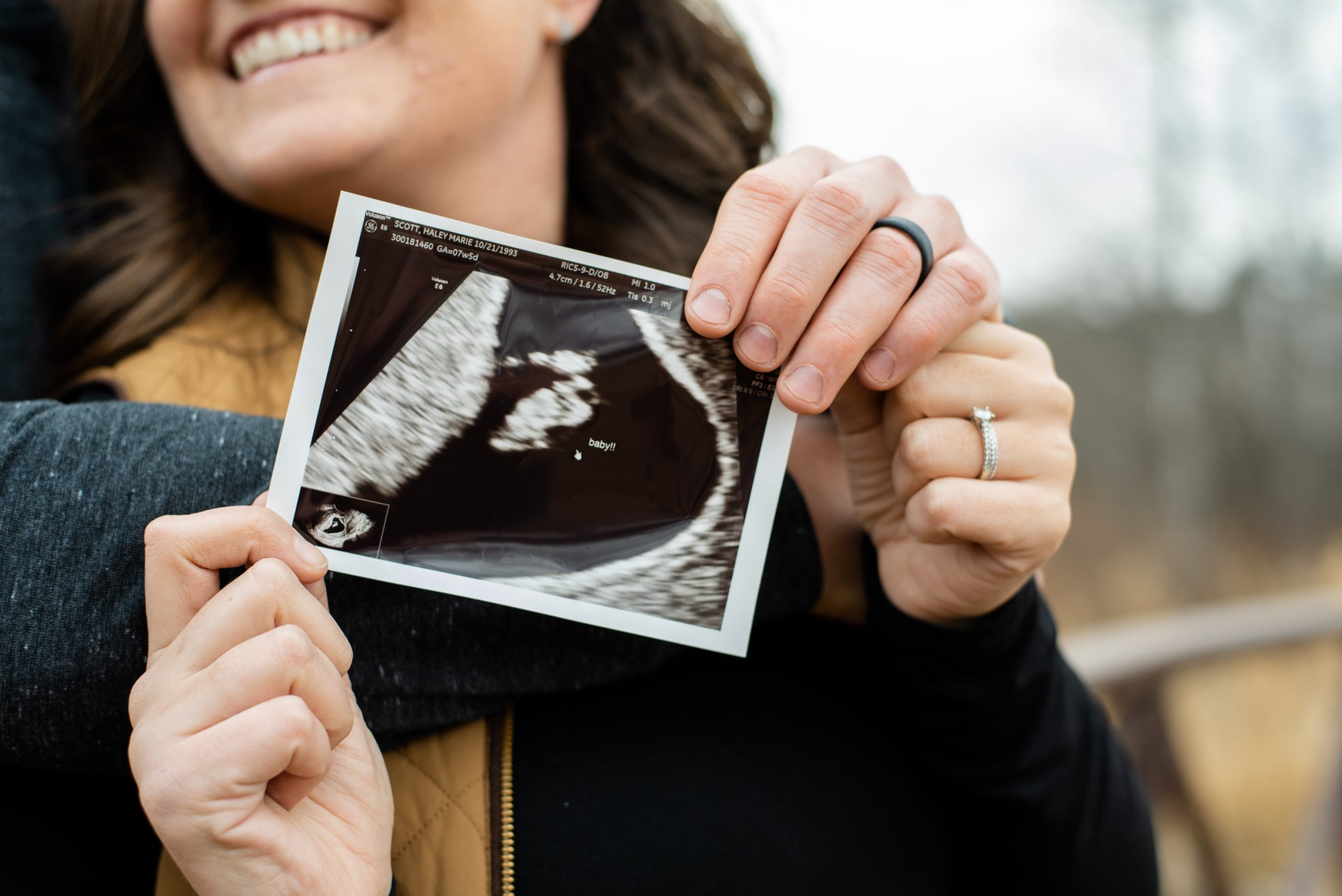 We had the best time telling our family and friends and sharing these unforgettable moments. After a rough first trimester riddled with morning sickness, we finally made it into the blessed second trimester and could share the news with the world! We had a quick little photoshoot with my friend Janie Maki Photography, went to get one more heartbeat check to make sure everything sounded good, and finally made our announcement to the internet world.

We have been so overwhelmed with love and support these past 22 weeks! It was so fun celebrating the holidays with our family knowing and getting gifts for Baby Scott. We are not finding out the gender, so it has also been fun to hear people’s guesses and experiences with old wives’ tales.

I am hoping I can use this second-trimester energy and start posting some recipes again! Food was the last thing I wanted to think about from weeks 6-16, but now that my food aversions and nausea are (hopefully) in the past, I would love to lean into these pregnancy cravings and share some new creations. Speaking of cravings: my two main ones are sweets like cakes and baked goods and salads!! Hopefully, these two will balance each other out.

Thank you for taking the time to read about our new addition to the family!

From my (growing) home to yours, 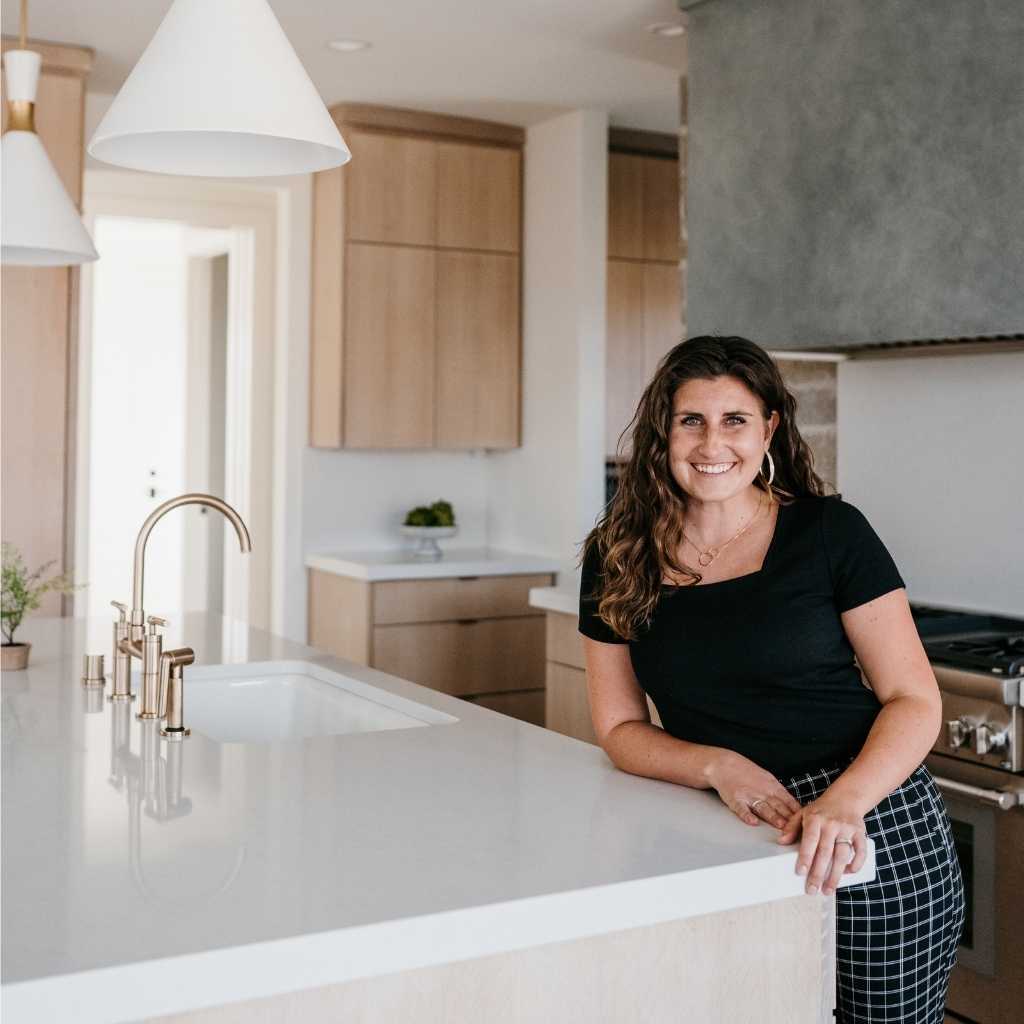 I’m Haley: a self-taught cook and major homebody from Minnesota! I love to recreate family comfort food and meals from my past, with a little less meat! 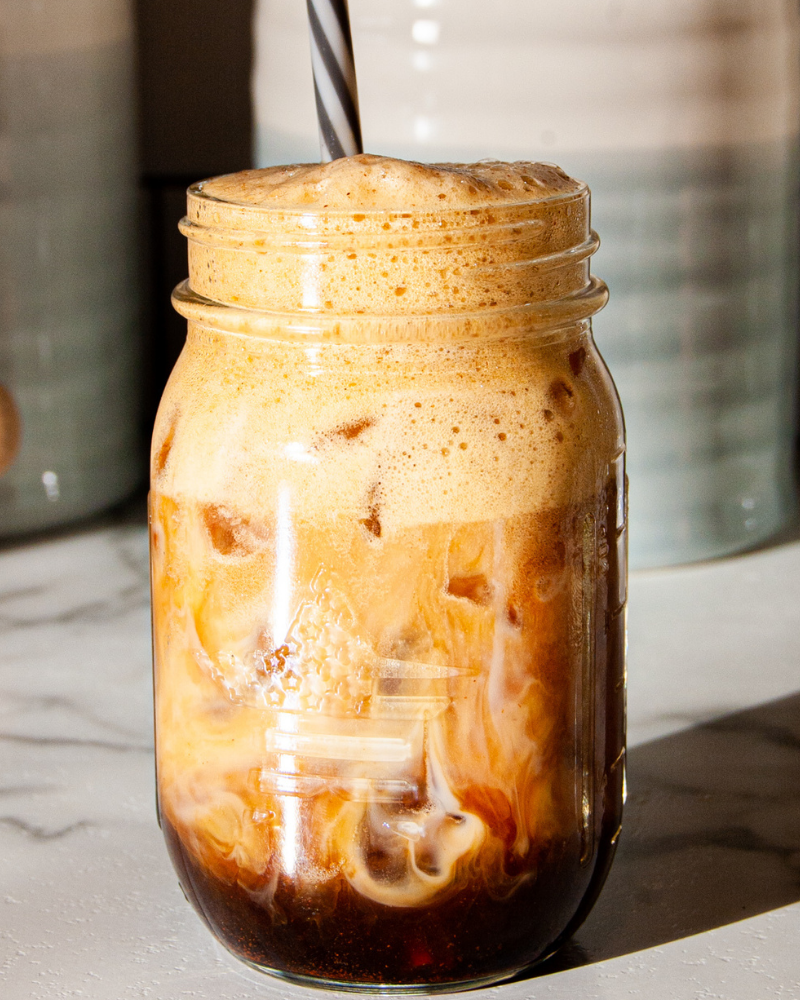 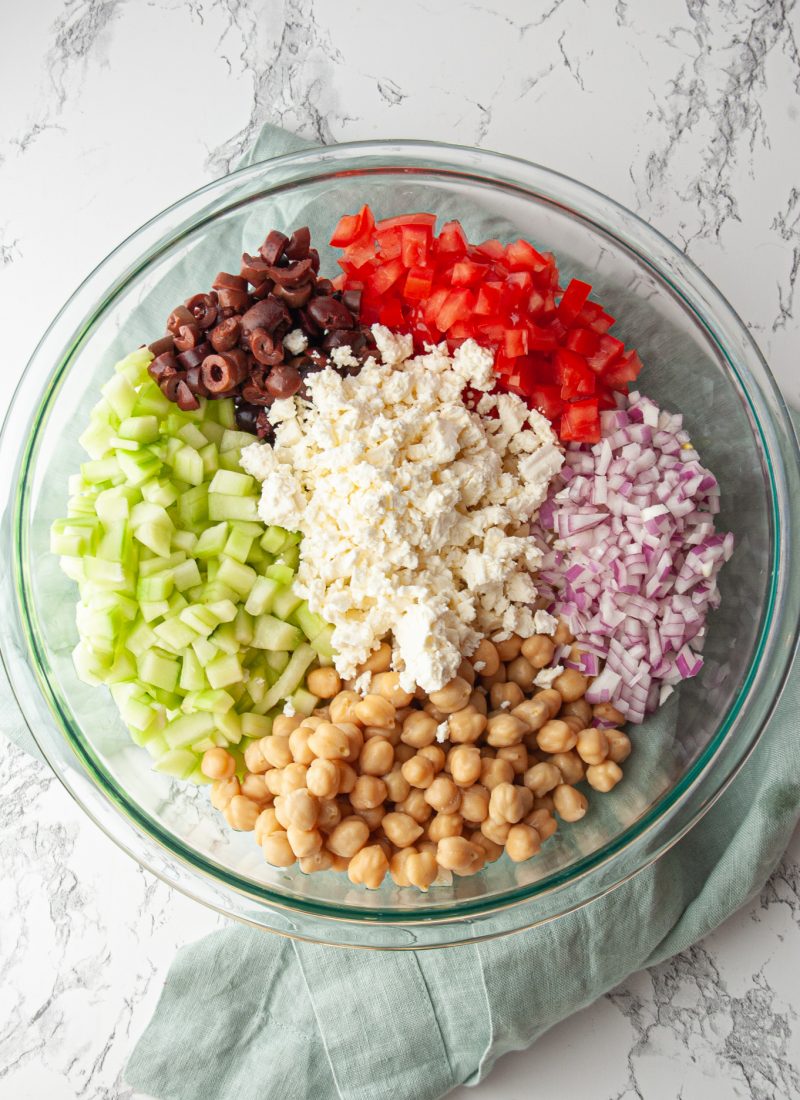